Stening® Bronchial stent follows the tracheal stent general design, with some changes on its walls’ thickness and its dimensions. It is introduced in a wide range of diameters and lengths, sharing a lot of indications described for the tracheal version.

Stening® provides detailed instructions for each device, including insertion and removal techniques, precautions and postoperative cares.
Important: Stening ST has a wall thickness of 1.5 mm. In order to offer the professional more possibilities in the treatment of different cases, we also manufacture alternative versions with exactly the same characteristics as the ST, but with different thicknesses: 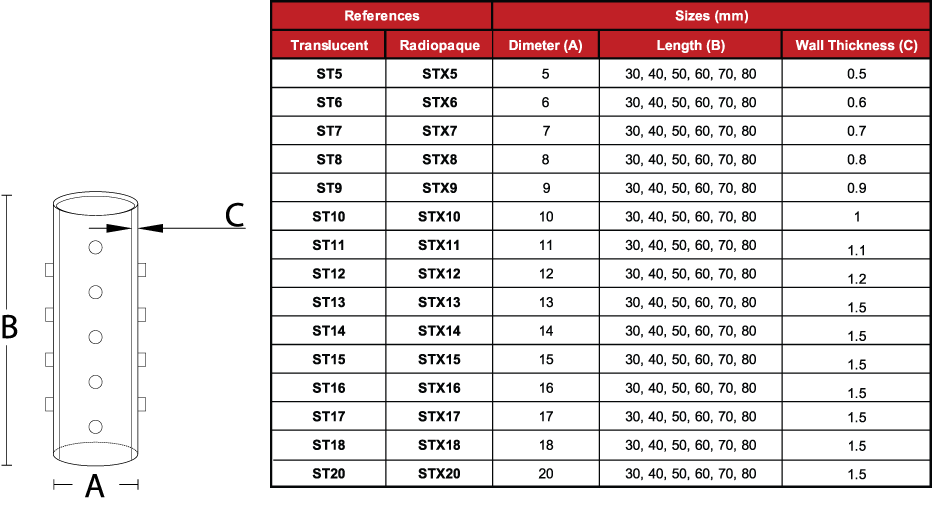 Due to the characteristics of the production process, the
measurements of the devices can vary by +/- 2%

Features
How to Use

You can follow the technique of introduction and removal described for the Stening® Tracheal Stent, replacing the tracheoscope for a bronchoscope of a suitable diameter. In general terms, a bronchoscope with an external diameter of 11mm and 12mm can charge all the bronchial Stening® prostheses. In bronchoscopes with a diameter of 10 mm every Stening® Bronchial Stent can be introduced excepting for the ST13 and ST12 with a length bigger than 40mm.

The procedure will take place under general anaesthesia.

The implant of these type of prostheses can be made directly through the work channel of the tracheoscope or bronchoscope.

A conventional introducer for silicone prostheses can be used as well. A rigid endoscope will be used to access the airway.

The length and diameter of the area that the stent will cover must be established correctly.

In this way, the prosthesis will be released. If it is necessary, it can be moved to a better position with an alligator forceps. The manoeuvre is much easier when the stent is lower than the injury.

Steps 1 to 3 will be repeated.

You have to stop the tracheoscope that contains the introducer and the prosthesis 5mm before the injury.

After that, you have to press the ejector plunger slowly. By doing this, the prosthesis will be expelled into the injured trachea.

Some stents’ charger models are not introduced inside the tracheoscope, but they are added to the proximal extreme, from where the stent is expelled. To accomplish this, the endoscope will have to be stopped in a proximal or distal way to the injury, as it was explained before, to push the prosthesis with the plunger that is provided with the endoscopic instrumental. In this way, the stent will travel through the tracheoscope until it reaches the trachea. At this point, we will feel a small reduction of the resistance in the pressure performed on the plunger, showing that the stent has begun to abandon the endoscope interior.

Correction of the stent position:

The stent may require some additional manoeuvres, focusing on correcting or adjusting its final position.

To move a stent in a proximal way, it can be taken by its edge and then you must pull with kindness.

To be more accurate we recommend a manoeuvre that consists on taking the stent by its edge as it was mentioned before. After that, you have to advance with the optical vision through the stent’s inside until you see its ending. Now pull the forceps and you will be able to see how the stent ascends through the airway.

Stop the pulling as long as you consider that the position is correct.

We will proceed to the intubation with the tracheoscope or the rigid bronchoscope depending on the case.

Of easy extraction, the silicone stent must be taken by its proximal edge with a crocodile forceps, with enough steadiness. Rotate the forceps 360º so that the stent bends, acquiring an omega shape and losing its radial resistance to compression. Then, pull the forceps and extract the prosthesis together with the tracheoscope.

The stent proximal edge can be introduced inside the tracheoscope. With this manoeuvre the vocal cords are protected during the extraction.

Other implant and removal methods are also possible depending on the experiences and preferences of the surgeon.

The product should not be reused because this can cause cross contamination.

A sterile non-bioabsorbable tubular device intended to be implanted into the trachea and/or a bronchus/bronchiole to maintain luminal patency, typically used in cases of obstructions/stenoses, fistulae, tumours, scarring, surgical resection and anastomosis, or pulmonary transplantation. It is made entirely of a synthetic polymer(s) [e.g., silicone] and may have various designs (e.g., semi-soft continuous tube, covered or non-covered mesh structure, straight or branched configuration) intended to conform to the endotracheal/endobronchial surface. It may be expandable in situ (e.g., self-expands) and disposable devices intended to assist implantation may be included.

Contact us for door-to-door shipments
all around the world